There is always more than one perspective or way to look into any aspect of life. Beauty and the complexity of the perception drawn on an object, concept or by an incident depends on many factors including creativity of the on-looker, epigenetics and the genes,and many others. It is basically how the mind breaks down the original information into a series of simple, easily perceivable data. The perceivable data, here can be different for different mind. Most often human mind maps complex concepts(every fresh incident or any new object) that it confronts into the simple terminologies in its known regime. Best demonstrations are the ambiguous images found with two or three images superimposed within each other as in the pictue below. The vase or two faces gets read by the mind depending on its caliber. 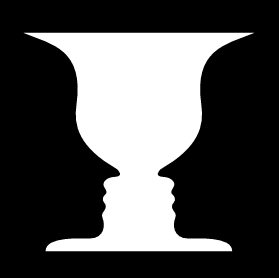 This blog is one such mapping to translate some basic electronic concept into another perspective. It talks about certain perspective to the communication (electronics) engineering terminology called digitalization and little inception into another denotation of the same.

Some Definitions:
An analog signal is any continuous signal for  the time-varying feature(e.g)  Sound vibrations in the air over time.

In the context of digital signal processing (DSP), a digital signal is a discrete-time signal for which not only the time but also the amplitude has discrete values; 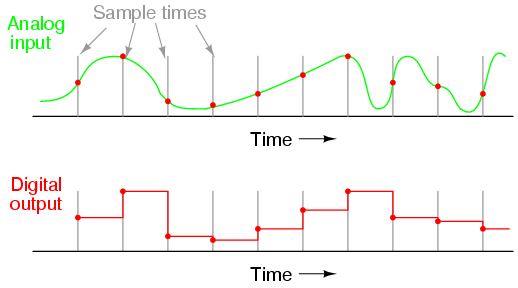 Human mind inherently does digital signal processing and beyond. It processes any information in digital format. Call it Maths, music notes or dance beats. Although everything gets illuded as analog (continuous) information, it can be zoomed into the world of discrete digits.
Time: We have divided the contiguous time vector into centuries, years, days, hours, minutes, sec, ms, ns and furthermore. As we advance further technologically,  digitalization factor becomes bigger.

Entertainment, of any form of dance, music or play. They go by numbers. Can you imagine dance practice without counting the moves and synchronising. Music is math, undoubtedly. Quoting the famous Tamil poet Kannadasan: All the music that the World knows and every tone that is made up is born out of the basic seven notations(carnatic music). Music is often correlated to set theory.

Sports and Games: Every sport involves math and calculations. Anything from throwing a ball with appropriate force at the correct angle determines its trajectories and the course of the game and hence the victory. The victory numbers including goal, player runs and has statistics, numbers and probability and hence digitalization involved.

Communication: Modern day communication is obviously built upon on digital waveform of ones and zeros. But if you consider primitive communication mode - human languages.It is interlaced pretty close.It is easier to understand and appreciate the beauty of any language with the inherent knowledge of numbers. Visualise the sentence forming and grammar as maths equations waiting to be solved.

We think, Visualise and Speak numbers. I have this habit of framing running sentences with three actions which gives rhythm while reading; thrill while writing and interesting as big picture.

Although the above mentioned and many more of the day-to-day activities/learnings/experiences seem like continuously woven action, it is basically the graph of series of discrete events marked against time in the scale of lowest order of time known.And human mind is digitalizer, at it best.

Posted by ambikaican at 6:24 AM No comments:

God as obscure object; questionable subject enforced ritual and beautiful feeling has entered into my little ones life.  I have tried  not to be forceable on the subject yet have made possible steps to promote the enchanting ideas believing in an higher conscience.
His attractions towards have God have had many ups and downs. But the recent questions and mode of thinking is very thought provoking. In general, Nature has made him a great thinker.
How questions makes me think he is budding scientist/Engineer.  But his Why questions are making me go crazy.
He had questions as these in various situations.

Why does the tree grow?? (This was clearly not a How question)

For him, King and God are one for the way their style of dressing.

Why God does not talk??

I told him. Stay quiet and you will hear him. After brief moments, he said he still cannot hear him. ;-) I said to myself "Thank God. He is still a budding philosopher"

Yesterday, when we went to temple. He had million questions on the God.
"Why is God saying hello". It funny to notice to the eyes of the little one, the blessing pose with one hand seemed like a hello.


Hail the king! Hail the God!! Hail our ancestors and their philosophy!!!


Posted by ambikaican at 1:39 PM No comments:

Ringing around the buzz words


Ringing around the buzz words


.com and internet are buzz words with my little boy. He wants to search internet for Cake recipes and passionate about cooking.

Abhinav got his first watch this weekend. He did the selection by himself. He finalised a red watch with Spiderman dial amidst my repeated distractions and temptations .We did not realise that it flashes light until we got back home. He was all excited about it until he discovered a small owner's manual with the Disney logo.
Somehow, that disturbed him, " When did Spiderman become a Disney guy?". Looks like the question was constantly nagging him that he kept asking that same question to my mother who called from India, his dad after he came back home and repeatedly to me. I was happy about two things apart from his observation


Finally, I had to breakdown the complex terms like acquisition to buying and further simper explanations. Adding to his existing confusions, there was this MARVEL logo in the package too. It took around three to four rounds of explanation before he seemed convinced.

The Best part of it is when he asked, "How did you come to know this?" Love you my boy!!
Then I had to explain that I had the same doubt when Divya aunty shared the same information with me that they went to Spiderman ride in Disneyland. He was convinced well "only" when I said I checked in internet also. After the double confirmation, he seemed completely convinced.It seemed that the word internet ringed the bell to change his deep (belief) understanding :-)

Posted by ambikaican at 1:38 PM No comments:


Nowadays, my little hero is very big fan of tamil movies especially the masala ones.

He was big fan of "Ko" even while he was  2 years old. He always used to love to run across the hall for the introduction theme music when hero chases the gang of robbers. The next on list was Thuppaki. He loved the stunts, music and heroine ;-) I remember that we were very excited when he watched the whole Singam - 2 movie with us on a movie night. He had few lots of favorite songs depending on the period of concern.  Neeram, Endrendrum punnagai, Singam dance tops that list.

Now, he has new outlook on tamil cinema. All this happened with the watching Kaththi movie in theaters. He loves the songs, the hero with the red shirt(that's how he calls it) and most of all the theme music and coin stunt. As the outcome, we enact the scene with lights off; music at the background and laundry coin box everyday evening. Abhinav is hero, me - the friend who switches off the lights and Nambi being the villain. It is so much fun seeing the little one so serious (with the music on) and of course hitting  hubby ;-)

He loves dancing for the dance numbers. So Nambi introduced him to "What a Karuvad" song  from VIP movie. He absolutely loves all movements that the actor makes in the song. He loves the high pitch "what a Karuvad" and the terminology "Sutta vadai". There are days where one could hear him continuously murmur the song. From the song,  the attention moved to that movie. He wanted to see the movie. He could not sit still to watch the whole movie. But he loved the way the actor reacts to the yells and scoldings of his father and highly attracted towards the word "Dhanda soru" meaning "sluggish person". (Uff!! It was tough to explain the meaning of the word)

Along side comes the movie Pokkiri(pronounced as Pokkidi), were he loves the Vadivelu comedy. He calls him "silly guy" and loves every comedy track of the movie. Fortnight back, I saw those scenes atleast a dozen times). I am made to enact the whole scene sequence where he is hit by the 2 guy and the girl(thats how he narrates it).

This morning during his daily chores, he narrated his favorite scenes of which each character in that movie. Following was the conversation we had:

Abhinav: That movie where the hero drinks the flower vase.
Me: ?!?!?
(After recalling all the movies he knew of.....found that) it is Pokkiri...
Abhinav: huh...yes...Pokkidi...
Amma...what is pokkidi pongal like??Is that a pongal? y do they call it like that...
Me: (Gave all evading answers.. He interrupted in the middle)
Abhinav: My favorite scene is when the hero  shouts "Help, help and help" in the elevator.
Me: Why is that favorite?
Abhinav: That is silly.
Me: What is silly about that?
Abhinav: Hero shouting for help is very silly. Does hero shout for help?
Me(dumbstruck): Mhmm...huh!
Abhinav: Tell me...does hero shout for help?no...right...Thats why it is silly....
Me: uff!!
Abhinav: (Laughs) For the silly guy, I like when he is hit by 2 boys and the girl....so
Abhinav: Also i like the heroine
(in that scene.?always. Before i could question further)
Abhinav: (smirks) You know when I like the villain??? (continues to Laugh)
When he is dead...
Me: ?!?!###$%%

Waiting to end the wait

Posted by ambikaican at 4:01 PM No comments:

Slowness impedes enhancements.
Not too slow; Not too fast;
chose the best and strike it right!!
Posted by ambikaican at 7:19 AM No comments:

It never gives complete satisfaction
Full moon over the wavy waters;
Striking Cool breeze in the running bus;
Fireworks across the city skyline.

It never gives enough contentment
Time with innocent infant;
Serial lamps in the quiet night;
Favorite drink in the open sky;
Seeing through the eyes of the loved ones
that you are the elixir of their life;
It never gives any quantifiable pleasure
but the addictive tranquility and craving
Life gets more exciting and absolutely relevant
having trapped in few such circular dependencies
Posted by ambikaican at 11:35 AM No comments: